It got hard keeping track of the blog, because of my investment in the thesis, and focusing on production and not prioritizing the blog as I wanted to use my time DOING the thesis, though the blog has suffered because of that.

I will definitely update the whole film’s progress over the summer!

WE FINISHED OUR THESIS FILM

In the meantime, check out the film’s trailer! We cannot release the actual film to the public yet! Hehehe~

The professor was on board with the theme of introversion. It was definitely reassuring to hear that we had been given the the okay to address the topic as that it came from the heart.

The professor also suggested that we approach our film as a narrated interview. The three of us would have voice-overs and there would be characters animated to the voices. Some classmates drew parallels to the film, “Creature Comforts” directed by Nick Park. They thought it would be a very cool idea, and that it would be “different”.

I thought long and hard this weekend. I expressed my concerns to my team members and some friends. But at the end of the day, all decisions are made for the benefit of the film and solely for the film. I do not think the interview idea will work and I have supporting reasons to support my viewpoint.

However, I think this different approach of having a mute introverted main character still answers the question of “What is it like to be an introvert”, if from the POV of the introverted MC, we see her answer the questions or “conversations” with the extroverts in silence. And if we wanted to go back to traditional storytelling, we needed more ideas.

Over the weekend, I did some research about Sushi, as that my group mates and I had a vague idea of some kind of Sushi Chef Cat for our main character. (Although fish is bad for cats, it is generally universally accepted as one of the things cats would eat). A friend of mine suggested I watch a sushi documentary called “Jiro Dreams of Sushi” directed by David Gelb.

I took notes on some things that stood out to me. But there was that REALLY brought it home, on a personal level too. The owner(s) of the sushi restaurant was out shopping for fish at a fish market. We may have fish markets that exist in America, however the fish markets I am talking about are traditional, crowded, and rustic.

Here are some examples of the traditional fish markets. Right away, it gives off an unsanitary and rustic feel, with vendors packed closely together. This was the environment I want to put our introverted feline main character in.

I’ve also had personal experience at buying at such markets and seeing them first hand. I remember following my mom around during a vacation in Hong Kong, and she would be busy buying and haggling for groceries at such markets. These markets were laid in any place imaginable for the business to sell. A memory resurfaced as I recalled these experiences. I once saw a young lady, either in her teens or young adult stage hacking away at a some meat with a giant knife. Whether she was behind the counter because it was her job or her family business, I’d never know but I remember being shocked at the juxtaposition of a young girl wielding a giant knife with much skill and precision.

I excited told my teammates this weekend that we could have a female feline hacking away at fish with bothersome customers that talk to her, but she never answers them back, just gives them their order. Such questions could include, “Why are you so quiet?” These would be typical questions an introvert would hear all the time, or questions relating to fish, or why she is working there. I think our main character works at the fish shop because it is her lifestyle, and because of money.

Our character’s goal in life would to obtain the OPPOSITE of this bothersome lifestyle, which would be of peace and serenity, and to eventually move away to somewhere quieter such as the countryside. Meanwhile the film could also have images of our MC returning home for the day and showing the relaxed “recovering” side of her. ie: sitting in a comfy cushioned chair by the warm fireplace, sipping hot catnip tea.

As for the look of the film, we have decided that the film would be in 2D with a fairy tale-esque sort of feeling. Some films for inspiration include a French animated film, “Ernest and Celestine”, directed by Benjamin Renner, Stéphane Aubier, Vincent Patar and another French animated film, “The Monk and The Fish”, directed by Michaël Dudok de Wit.

I couldn’t get Thief Cat out of my head after our brainstorm session on August 29th.

So I jotted my thoughts down.

This also raised the question, WHY a thief as a cat? Would this give new meaning to to the term “Cat Burglar”? The google definition was as follows: “a thief who enters a building by climbing to an upper story”.

The professor also raised that question the next time we had class. WHY is it a thief.

She also mentioned instead, we should find a life experience instead to make a film about, because if it doesn’t have “heart” your audience would not be able to relate to your film. All the members of the group agreed with that settlement and decided that we should meet up soon to discuss it some more. I asked the other members to bring in ideas of some life experiences to the next meet up that they might want to share and possibly turn it into a potential film. I was also assigned homework by my group members to watch the film, “The Cat Returns”, directed by Hiroyuki Morita.

The day of the next meet-up, we shared our ideas and came up with general and admittedly universal topics such as friends, family, and school life. Everyone agreed that the “idea” was hanging right there, the answer was right there, we just had to find it and dig through it. We then discussed films and research in general to get some ideas. And then a breakthrough it. I gasped extremely loudly and exclaimed, “JELLYFISH PRINCESS!” 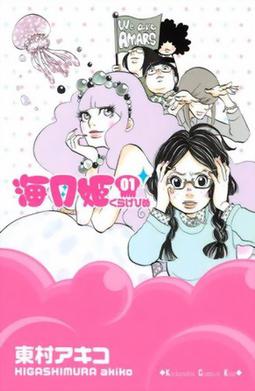 A Japanese josei manga series written and illustrated by Akiko Higashimura, the manga was adapted into an anime television series produced by Brain’s Base and has been licensed by Funimation. And also one of my favorite anime of all time (though I hated the ending mainly because it left me unsatisfied). The reason why I had exclaimed so loudly was because this series was about introverts. And if there was something the three of us in the group had in common, other than cats, it was the fact that we were all introverted people.

We had finally found the theme of our cat story, and the best part was that all the group members could relate to it as well. The three of us decided to research more about introverts and get more ideas about how to approach the project for next time.

I had no idea what I wanted to do for my thesis film.

The best idea I had was some cyperpunk sci-fi mashup with the element of water and fishes. The concept was pretty much “space is like an endless sea of exploration”, and I wanted to combine the two ideas of space and sea together.

This was however very ambitious and required alot of help, and so I joined another team instead.

We met up on Saturday, August 29th, to discuss ideas. One group member brought in some cat books, though one stood out to me the most, a children’s book, “Grumpy Cat” by Britta Teckuntrup. It was very short and simple, with clear traditional storytelling, and it was really cute! My group members agreed we wanted to do something like it.

We brainstormed a lot that day, but pretty much decided that we also wanted a story structure with Character A wanting “B” but Conflict “C” was in the way of getting “B”.

We also decided to go the anthropomorphic route because we felt it would be more adventurous, fun, and whimsical if we had a fantasy like setting. This lead to more creative possibilities to what the main character could be.

My group members liked the idea of Young Orphan/Thief Cat, and we decided to come up with goals or things that the character would want to have.

At this point in time we felt we were happy with our choices and we decided to draw some possible character design looks and left it at that for the while. These are some early preliminary sketches I decided to play around with.

This is your very first post. Click the Edit link to modify or delete it, or start a new post. If you like, use this post to tell readers why you started this blog and what you plan to do with it.